The parents of my Grt. Grt. Grandfather, Warwick Brookes 1808-1882, were Ralph Brookes 1790- and Eleanor Sagar 1786-1853.
This is where my link to the Sagar line commences. This is the line that it is said, (even as far back as being mentioned in the 1882 published memoriam to Warwick Brookes), to have a family connection with The Earl of Warwick, The King Maker, from The Wars of the Roses. Many first born sons in the Sagar, and then the Brookes lines are named Warwick as a result. I haven't yet been able to prove this.

What I do know, however, is that the Sagars have within their family, a well known group of clock makers, from Askrigg, North Yorkshire and other areas of northern England. Edmund Sagar 1746-1805 is one of these. He is Eleanor Sagar's uncle. 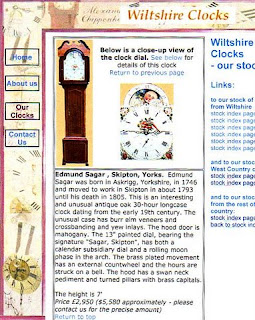 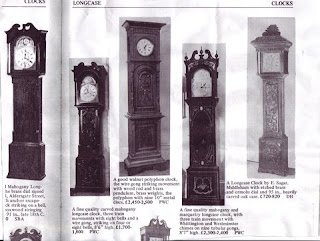 Various examples of Sagar Clocks. These can still be readily found in the marketplace today.

Another Brookes family name comes through the Sagar Line. My Grt. Grandfather, William Terry Brookes 1864-1923 is named after one of his own ancestors, Mary Terry c1750. Mary was the second wife of Warwick Sagar c1737, and therefore, William's Grt. Grandmother. Warwick and Mary had three children, one of which was Eleanor, his Grandmother. Warwick's first wife was Anne Fawcit 1728-1782, with whom he had 7 children.
Posted by Peter Berry at 15:38

Email ThisBlogThis!Share to TwitterShare to FacebookShare to Pinterest
Labels: Sagars