I have already mentioned on his home page that Warwick 1875-1935, businessman and M.P. had an interest in yacht racing, detailing his (brief) ownership of "Westward". Here is an extract from a report in "The Observer" newspaper of June 13th. 1920 detailing his entry in the historic Nore to Dover races.

The Royal Thames Yacht Club arranged two races from Nore* to Dover, (although the actual course on this occasion was to be Southend Pier to Deal, even though the historic name was adhered to). One race was for yachts over 70 tonns Thames tonnage, and the other for yachts between 35 and 70 tonns.

Entries were received for both events, but it was found impossible for some yachts to complete fitting out in time, and only one of the entrants for the bigger event was able to start. To avoid a sail-over, the sailing committee arranged with the owners to start all the vessels in one race.

The schooner "Suzanne" made her first appearance under the racing colours of her new owner, Warwick Brookes. She was scratch boat, (the fastest boat in the fleet with no time allowance), and allowed Mr. J.W Cooke's cutter Thanet 19 mins. 51 secs., and Colonel S.G.L. Bradley's yawl Celia 32 mins. 21 sec.

There was a nice sailing breeze from the East North-East when they started at 11.00am and Suzanne was over the line 14 seconds after gunfire, Celia, 3 seconds later. Thanet was 50 seconds late. They made a reach on the port tack to the Nore, and from there to the Tongue lightship. Suzanne maintained her lead and Celia held on to second place. From the Tongue it was a free reach on the port tack to the Gull lightship, and a run from there to Deal. At the finish it was Suzanne (second prize), 3 hours 54 minutes; Celia (winner), 4 hours 17 minutes and 20 seconds; Thanet was not timed. 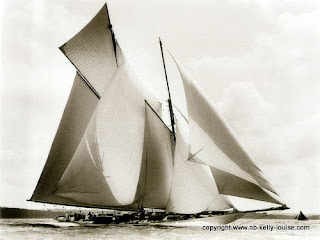 The schooner Suzanne
* Nore is an area in the Thames estuary, adjacent to Sheerness, <Click>. This alternative course had been run previously when, in 1909, Dover harbour was under construction.
Posted by Peter Berry at 09:00

Awesome story! I was wondering if there was any other information about the sailing/racing history of Suzanne. I believe she was designed by famed scot, William Fife III. I have seen other places, such as the Frank Beken photograph spell her name Susanne, and I'm trying to find some more history on the boat. Thanks!

Sorry for the delayed reply to your comment, I have been away. Unfortunately, at this time I don't have any further information about the yacht Suzanne, but am constantly researching the life and times of the Brookes family, so if anything does come up in the future, I will publish it here.

On 9th May 2012 I added a new post detailing the family lives of Warwick Brookes 1843-1929, the photographer. This includes information about his son, also Warwick, owner of the yacht Suzanne, as well as details of where to obtain more information from a biography written in 1983.

I believe that this is one and the same boat as the Schooner built in 1904 by William Fife in Glasgow, and named Susanne for one of Oscar Huldschinsky's (my great great grandfather) daughter's. In fact the photo taken from the other angle hangs in my house and the house of many of his relatives. So I'm trying to connect the dots, since I found a record that she was sold to a certain: A Drossopuolo from Greece: http://www.clydeships.co.uk/view.php?ref=10047
any other information greatly appreciated.

Antonio. I do know quite a lot of information about the person Warwick Brookes 1875-1935, my 2nd cousin 2Xremoved, but unfortunately not a great deal about his yachting exploits other than what appeared in the national newspapers of the time, which are archived on line. Your assumption about the Schooner Susanne (or Suzanne as recorded in some documents), is correct, built by Fife of Glasgow. It is one of several he owned, but was his favourite and most successful. The image I have published, was I believe, taken by Beken, Marine photographer’s of Cowes IOW. The one here was taken from a published biography of his son - John Charles Hugo Brookes, who became a monk after his military service in the Irish Guards. The book is called “Father Dolley The Guardsman Monk” by his friend Anthony Wheatley, after his death in 1983. It contains information about his father Warwick’s life including a brief description of his yachting exploits. The book, although out of print, is still widely available from used book shops online.
This Warwick Brookes was a wealthy entrepeneur and MP who lived “the high life” and was bankrupt on more than one occasion. Just before Cowes Week in 1935 he visited his daughter Claire and said to her “ come on let’s go to Cowes on my last fiver”. They did, and he died there, and is buried there - plot 12 Northwood Cemetry, Cowes, but there is no headstone. I am in contact with his granddaughter who has given as much information as she is able to including the statement to his daughter about his last fiver, but I think that also appears in his son’s biography.

Another point that might be of interest Antonio. Brookes was known for obtaining his boats “on the cheap” after the WW1 - owned by German owners and confiscated to be sold on the cheap after the war. Westward was documented to have been obtained in this way, but wasn’t kept long by Brookes. I note from your link that Susanne’s first owner before the war was of German Nationality from Berlin, so my presumption might be she was obtained in the same way, but kept rather than sold on for profit.