Again, not related to the Brookes family, John Henry Letherbrow was the brother of Thomas Letherbrow, the lifelong friend of my grt grt grandfather Warwick Brookes 1808-1882. I mentioned him in my article on Thomas, and stated that John was an artist of great promise, and had studied at the Munich Academy of Fine Art. Unfortunately, he passed away at the age of 47, in Munich, before his promise as a great artist had been fully recognised. It was fashionable for artists of that time to attend art colleges in Germany, as they were seen to be the premier establishments where the skills of the artist could be polished to perfection.

This depicts a piece of his work:- 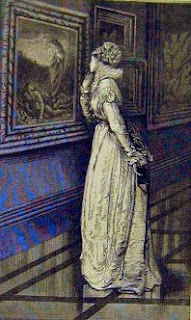 The story of Endymion "What is it" by J. H. Letherbrow.


John Henry Letherbrow died on 8th November 1883 at Krankenhaus, (German for hospital), Sendlinger Tor, Munich, Bavaria, (now the location of Munich University). His will was proved on 10th January 1884, being shown as late of 5 Grove Street, Ardwick, Manchester. (This address no longer exists, the area having been extensively re-developed). The will was proved at the principle registry by John Cunliffe, of Lumber Hey, (possibly Lomber Hey), near Stockport, Cheshire, (now a suburb of Manchester), then in the county of Chester. Commission agent was Thomas Letherbrow, of Cavendish Villa, Davenport, Stockport, brother and executor. Thomas Letherbrow's main occupation, for the whole of his life was at Messrs. Cunliffe Brooks and Co., a bank, where he eventually became chief cashier. I am presuming that the Cunliffe linked to the will, was something to do with the bank where he was employed.
Posted by Peter Berry at 21:07