This Warwick Brookes, was the photographer, who's business at 350 Oxford Road, Manchester was celebrated as being an establishment of quality within the profession, with clients from the upper classes and the theatrical world visiting from across the country. He was involved in photography from the early days, where the skills of a chemist were equally as important to those of an artist. He was the inventor of the Academy Camera, an early instrument, that was made in quantity by the Billcliff camera company. He was the cousin of my great grandfather William Terry Brookes.

He had three children, Blanche, Warwick and Gordon Byron. Each are the subject of their own pages on this website detailing their own exploits during their lives. Here though I will focus on the family of his son, also Warwick, who was born in 1875, and passed away in 1935 in Cowes, Isle of Wight, during Cowes Week.

This is Warwick, a flamboyant businessman, who later was a business partner with his brother-in-law, Eugen Sandow. At the beginning of the Great War of 1914-1918, he established a factory for the manufacture of war equipment. He had become Managing Director of both the Junior Army and Navy Stores and of the Civil Service Co-Operative Society. When these two concerns were amalgamated, his holdings became so valuable that he received an offer for £250,000 for it, which he refused, but later, during the post-war slump, sold it for a tenth of that. In the 1916 election, he stood for parliament and was duly elected as a Coalition Unionist member for Mile End. His business career would see him immensely wealthy at times, and at others, on the brink of bankruptcy. His partnership with Eugen Sandow saw him managing Sandow's prestigious centres of physical culture in London. By 1932 he did appear in the bankruptcy courts, and by 1935, was dead, having travelled to Cowes on the Isle of Wight, with his daughter Claire, to watch the yacht racing, which he had held a lifetime interest.


Warwick was involved in a high profile divorce case around 1900. I have a detailed account of those events here: The scandal of divorce This is Beatrice, his future wife after that case.

Although her parents, Eric, who was Swedish, and Elizabeth Waldenstrom were living in Manchester, she was married to a Russian nobleman by the name of Emile De Minciaky, who had been an attaché at the Russian embassy in Stockholm, and London, but later worked at a copper rolling factory in Manchester. During her adulterous relationship with Brookes, a child was born, John Charles Hugo. He was christened De Minciaky, but in open court, during the divorce proceedings, both Beatrice and Warwick admitted that the child was theirs, and as a result of their relationship. Another child, Claire, was born in 1899, before the decree nisi was issued on the 20th March 1900. The decree absolute was issued on 4th October 1900. Brookes and Beatrice married in 1900 immediately after that. She passed away in 1926.
John went on to live his own amazing life as an officer in the South Lancashire Regiment (Prince of Wales Volunteers) during the first part of the Great War, and later, in the Irish Guards. He only found out about his past connections with De Minciaky when he was rummaging through his mother's papers at the age of 16, and discovered a family tree which detailed this.  After confronting his parents, he later referred to Warwick as his step-father. In 1925 he went to Downside Abbey, in Somerset where he became a Benedictine Monk, changing his name to Dom Rudesind Brookes. He later returned as chaplain to the army, attached to the Irish Guards, where he also took part in the second world war, being awarded the Military Cross for extreme gallantry during an action at Anzio. This is his citation for that:

Father Brookes has been the chaplain attached to the Bn ever since it came abroad. he has now served in both the Tunisian and Italian campaigns. In both these campaigns he has shown almost unbelievable devotion to duty and bravery. No wounded or dying man wherever he may be, has gone without Father Brookes' attention. he has been in places where the fire was impossibly heavy and yet he has given comfort to the dying without any thought for his own safety. During the last few weeks, in probably the fiercest fighting the British Army has yet seen, the priest moved through shot and shell never appearing too tired to go the furthest points to help a wounded man. He acted as the MO's assistant and on many occasions helped the stretcher bearers in their dangerous task of carrying men in. There are not words strong enough to describe the wonderful and shining example father Brookes gave to all ranks, and all the officers and men of this Battalion would give testimony to the tireless kindness, inspiration and help they all received from his hand. His personal bravery in addition to his priestly qualities gained him the admiration of all. The sight of Father Brookes pacing up and down reading his breviary under heavy fire has restored the confidence of many a shaken man.
In recognition of this Chaplain's extreme gallantry and unsparing devotion to duty, I recommend he be awarded the Military Cross.

Warwick's other child, his daughter Claire also born before Brookes and Beatrice were officially married, although, I believe was never admitted by her, had a very privileged early life alongside John and the rest of the family. They were brought up in the upper classes, and as is the norm in those circles had a nanny to look after them. Claire would also spend time living with her Aunt, Blanche, and her two children, Helen and Lorraine, whilst her husband Eugen Sandow was away performing his strong man act all over the world. As she entered her late teens, she enjoyed the trappings of that lifestyle, often mixing with her brother's officer colleagues at society parties and balls during the London season.

Claire married one Robertson (Roy) B Stewart, (her first husband), at a large society wedding at the Brompton Oratory in December 1920. They lived near to Warwick and Beatrice who still lived on Park Lane, London. They shared many a party outing together with her brother John, (who at this time had a bachelor flat on Mayfair), and her great friend Evelyn Laye, a well known actress of the time, see: Evilyn Laye . They would often go to Cowes, Isle of Wight, around the period of the early 1920's to take part in Cowes Week, where their father Warwick enjoyed success with his ocean going racer, Suzanne. 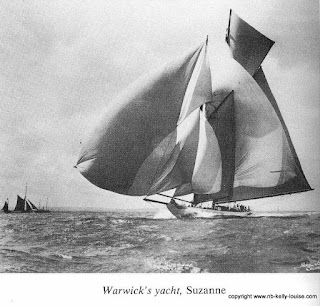 Claire passed away in 1983, a year before her brother John.

Dom Rudesind Brookes, OSB, OBE, Titular Abbot of Sherborne, who won the Military Cross while serving in Anzio, Italy, as a chaplain to the Irish Guards; at Downside Abbey, Bath, on Monday; aged 85.

He served as a subaltern with the Irish Guards in the First World War. His commanding officer who became a life long friend was the future Field Marshall Lord Alexander.

In 1921 he went as ADC to the Governor of Malta where he probably gained his vocation; because at the end of his training in 1925 he resigned his commission and entered the Benedictine novitiate at Downside.

In the Second World War he returned to his old regiment as chaplain and was with the Irish Guards in Tunisia and at Anzio where he won the M.C. for “extreme gallantry and devotion to duty.”

After the war he was parish priest of Beccles, Suffolk, before returning in 1956 to Malta as a chaplain and unofficial liaison officer between the Governor and the Archbishop at the time of the Mintoff dispute. While there he also became Headmaster of St. Edward’s College.

In 1966 he was appointed a titular abbot and went as Abbot Procuator to Rome where he remained for 11 years.

A requiem Mass for Chaplain the Right Rev. Dom Rudesind Brookes, OSB, Titular Abbot of Sherborne, late Irish Guards, will be celebrated at the Little Oratory, alongside the Brompton Oratory, at 5.30pm on Wednesday, February 27, by Dom Eric Phillips and Father Alastair Russell.

Much of the other information for this article has come from a 1983 biography of John's life, titled "Father Dolly, The Guardsman Monk". The author is Anthony Wheatley (son of Dennis). Although I believe it is now out of print, it is still widely available from used bookshops who advertise on the internet.
Posted by Peter Berry at 13:16