A Chance Discovery In India.

In March 2015 we made our fourth visit to India, a country we find fascinating.
We had recently visited my 4th cousin, who we had discovered living in West Sussex, and is the granddaughter of Warwick Brookes MP, 1875-1935. Her mother Claire, the MP's daughter had married into the Durand family, and her husband's own mother came from the Bruce family, the Earls of Kincardine and Elgin. My cousin has an 1894 photograph of her grandmother, taken in Shimla, India in 1894, on her living room wall. 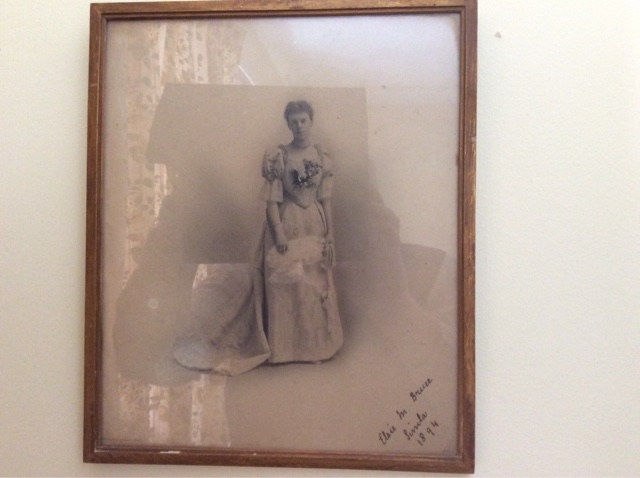 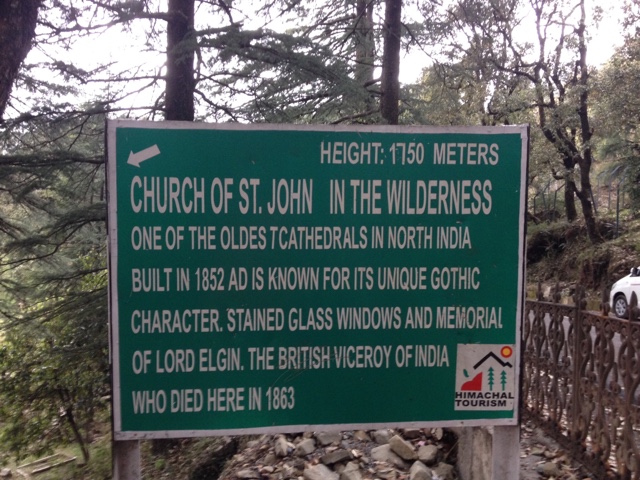 During our tour of the North we visited both Shimla, the Summer administrative centre of the British Empire in India, as well as Dharamsala, where by chance we visited the Church of St. John in the wilderness, the oldest Anglican Church in Northern India. To our amazement we found that James Bruce, the brother of my cousin's great grandfather had been Viceroy of India 1862-1863, and had died there from a heart attack in 1863. His wife had erected a memorial to him at this church which is also the location of his last resting place. 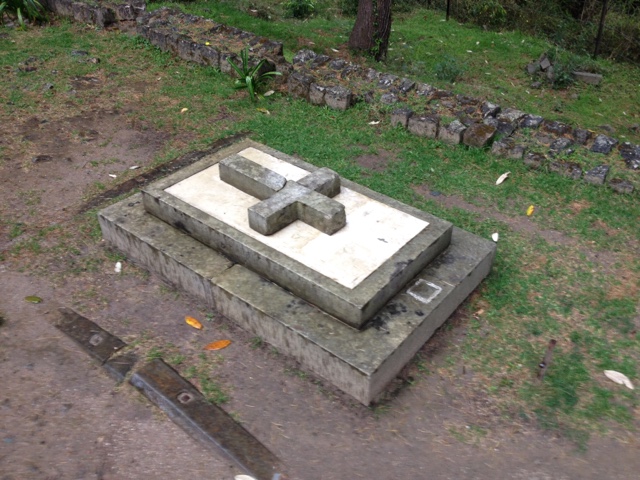 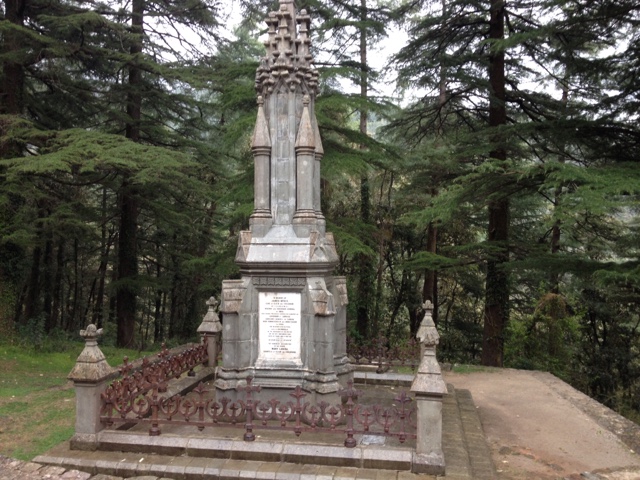 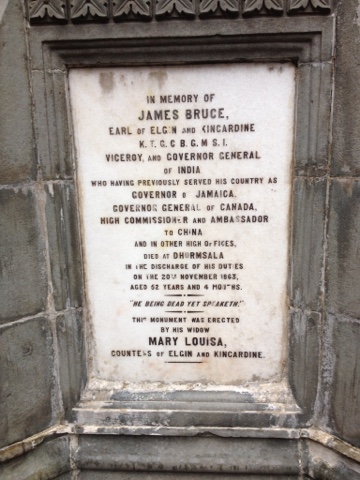 His son, Victor Bruce, also became Viceroy of India later, and he of course would be the cousin of the lady whose photograph adorns the living room wall in West Sussex. He was Viceroy at the time the photograph was taken in Shimla, most likely at the Viceregal Lodge, which we also visited. 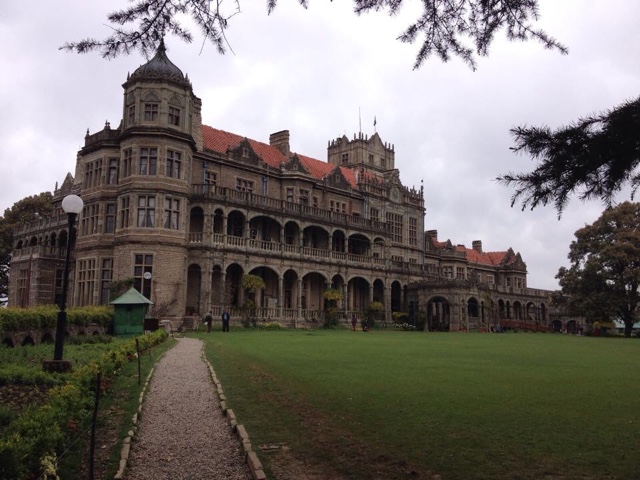 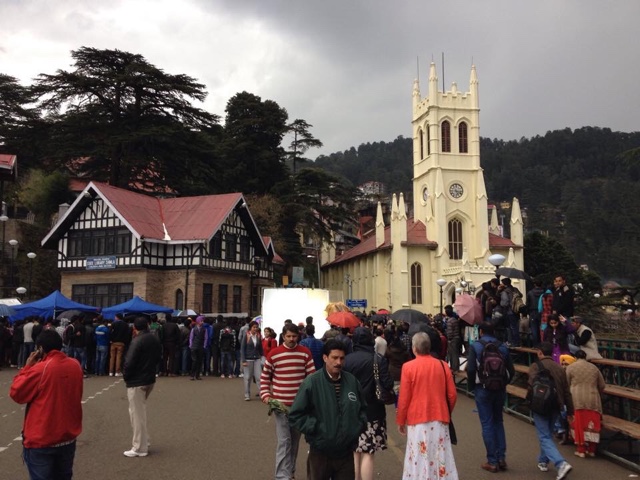 The above images are of the Viceregal Lodge in Shimla, and Christ Church Shimla, the location of Victor Bruce's daughter's own wedding.
A little more digging revealed that my cousin's grandmother's future husband, Algernon George Durand was the military secretary to the Viceroy in 1894. They married back in London in 1895.
It is with all this information that it now appears this is how the two of them may have met, and the photograph on my cousin's wall is of her grandmother Elizabeth Marjorie Bruce, dressed in a ball gown, taken in Shimla in 1894, most likely while she was there visiting her own cousin the Viceroy. We toured the inside of the Viceregal Lodge and were able to see for ourselves the opulent ballroom that would possibly have been the location of the portrait at the beginning of this post.
As an unrelated matter, we also visited McLeod Ganj, the location of the Dalai Lama Temple, his holiness' residence in India while living in exile from Tibet. On our second day there we were lucky enough to meet the man himself. A very surreal experience. 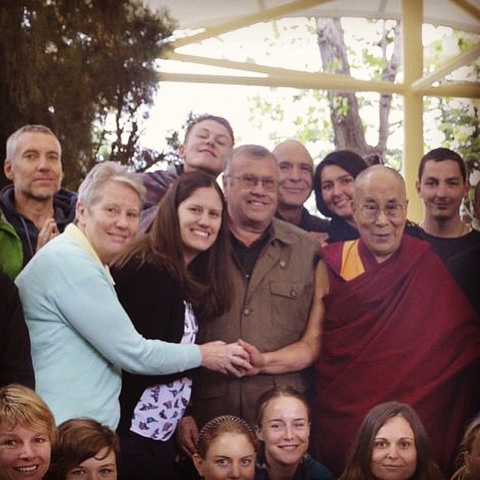 Whilst researching the address that my great grandfather was living at according to the 1891 census, aged 26, along with his 26 year old wife Hannah, and my newly born grandmother Doris, aged just one year, I made an astonishing discovery. They lived at number 62 Barrett Street Stretford. Here is the census page to prove it. 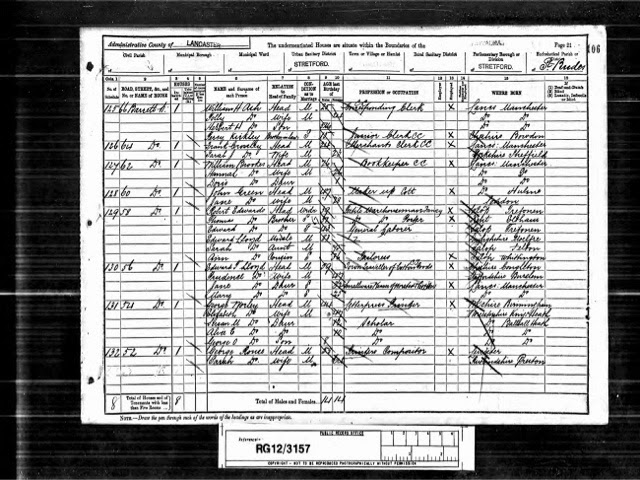 My great grandfather, William Terry Brookes was an accomplished landscape painter until his death in 1923. I own several original watercolours that are his work. He is of course the son of the more famous artist Warwick Brookes 1808-1882, who was famous for his pencil drawings of child life.
When I entered Barrett Street into a present day map search to try and find its location, the results that were returned were astonishing. Unbeknown to me at the time, also living on Barrett Street, Stretford in 1891 was another young family. They are listed at number 8, just a few doors down on the same side of the street, as Robert, aged 33, his wife Elizabeth, also 33 and Lawrence S, their 3 year old son.
Nothing unusual there? Well the surname of this other young family was Lowry. Yes, the famous Manchester artist, whose depictions of early 20th century working life in Salford by his painting of "matchstick men", (a term he would not like to be used) none other than LS Lowry, was born on the same street just a few doors down, and at the same time give or take two years, as my own grandmother. Here is the census page to prove it. 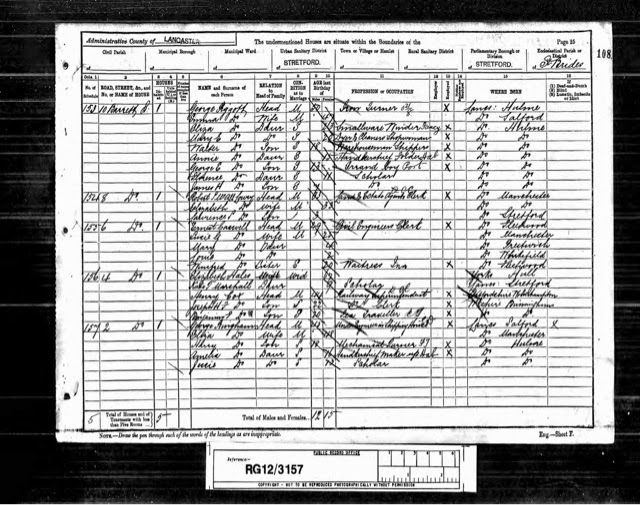 That opens up all sorts of possibilities. Lowry's biography states that he started drawing as a young boy, and his parents, recognising his interest, arranged for him to attend art school. He lists his inspiration as being the pre-Raphaelite artist Dante Gabriel Rossetti, who was a contemporary of my great great grandfather Warwick, and I have letters that were sent between the two of them in the 1870's.
Did the young Lowry ever watch my great grandfather WT Brookes painting his landscape watercolours as a boy, perhaps together with his young friend Doris, at the same time as listening to stories about the Manchester pre-Raphaelite movement and the artists of the previous generation that were part of it? We may never know. What a pity we only now have Internet access and the people we can link by using it are no longer around to ask.
Posted by Peter Berry at 19:26 1 comment:

Here we have a photograph of Cathedral Steps, Victoria Terrace, Manchester, circa 1870's. To the right of the steps, a sign "Warwick Brookes" can be seen attached to the front wall of the building, above the first floor window. There appears to be furniture stacked around of the ground floor entrance.

We know that Cathedral Steps was the address of Warwick Brookes', (my 1st cousin 3X removed), first studio before he relocated to 350 Oxford Road for the remainder of his career. We also know that he married Mary Simpole, (Granny Brookes), and she was the daughter of Charles Simpole, a furniture dealer. A search of the business directories and censuses around that time shows that Charles Simpole occupied premises also at Cathedral Steps, (Cathedral Yard), and operated his furniture business from there.

Making an assumption from the detail within this photograph, it now appears to us, from this chance purchase from eBay today, this may well be how the two of them met, and the rest is history. They went on to have three children, also mentioned on this website - Warwick Brookes MP 1875-1935, Blanche Brookes 1872-1959, and Gordon Byron Brookes 1880-1916.

The photographer's cousin, also Warwick Brookes 1854-1922, (my great grandfather's brother), also ran his own photographic studio from Victoria Street, as did Le Chevalier Lafosse at various points around that time. The younger Brookes moved on to a studio in Marple Bridge, and Lafosse moved both his studio and home to Knolls House, Higher Broughton, Salford.

Although mounted on original card, and not marked on the front, I would like to think the image of his studio might have been taken by Brookes himself. Probably true - why would a photographer take an image of another's studio premises?

The Letters Of Dante Gabriel Rossetti.

I have already referred to letters from Frederic Shields to Dante Gabriel Rossetti in other posts here. Shields wrote to Rossetti informing him of my great (X2) grandfather Warwick Brooks' poor health, which had forced him to give up his everyday work, and to rely on his artistic talents to support his young family. I now have access to two letters sent by Rossetti directly to Brookes as a result. Brookes was selling photographic representations of his art at £4 a set, and Rossetti wanted to acquire them. According to Letherbrow's biography, many eminent artists of the time acquired these sets of photographs, as well as museums, such as the South Kensington, now known as the V&A.

I lately saw a set of photographs from some admirable drawings from nature by you, and I understand from our friend Mr. Shields that a set can be obtained from you for £4. Will you therefor allow me to enclose that sum by P.O. order and to request that they be kindly sent to me at your convenience. I cannot doubt that, when seen they will quickly be appreciated in London by all whose judgement is of any value.

I cannot refrain, though a stranger, from saying how deeply I regret to hear of your present state of health, and how sincerely hope it may still change for the better; and with all best wishes, remain

Another letter was sent to Brookes 7 days later:

Many thanks for the beautiful portfolio of photographs which I value highly & which are already meeting with equal appreciation from others. The babies in particular, seem to me triumphs, every one of them; not that they are better than many of the other figures, but because every artist knows to his cost how difficult it is to attain such success in representing babyhood.

I do not know if you allow anyone to purchase fewer photos: than a complete set; but if you do, my brother is anxious to have about half the number, & in such case would send you word of his favorites among the series. With kind remembrance to Shields if you should see him.

I am your very truly,