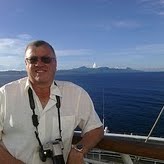 All through growing up I had heard talk within the family of an artist, who in his day, was quite well known in Manchester for his etchings. It was rumoured that there may be examples of his work held in The Victoria and Albert Museum, London, but a 1970's visit there proved fruitless. As a family we also owned many original water colours, and one oil on canvas which were painted in the late 19th. century and early 20th century by my Great Grandfather, William Terry Brookes. We had tried, before the invention of the Internet, to research who this other artist, Warwick, was, why he was well known, and who he associated with. This was without success.

It is only recently that we have been able to accurately put together the story, not only of my Great Great Grandfather Warwick, but also the rest of his contemporary family, who are all also famous in their own right. I have been lucky enough, as a direct result of an Internet Google search, to be able to acquire a rare book, published in 1882, the year of his death, as a memoriam, with text reproduced from The Manchester City News, over 3 weeks in that year. We found this advertised in a USA antique book shop, and it also contains a genuine photo set of his drawings that he was selling during an illness which was stopping him from providing a family income. This book has provided a huge amount of information directly from his time. Manchester Art Gallery, and Manchester Central Reference Library, also hold much of his work in their archives, including a copy of my book! This really has only recently come to light as a result of digital archiving. We also now know that The V & A do in fact hold examples of his work, that are there because Queen Victoria and her daughter Princess Louise bought them off him. Many of his child subjects were of his own immediate family, my family.

We believed the story to be so interesting, and significant to the history of Manchester, that full and verified documentation was required. This is what this site is about. It is currently a basic template, which will be built upon from the information we already hold, and expanded using new posts, as fresh information is gained.

One thing we found out very early on is that Warwick is a family name that was given to the first born son throughout history. It is said to be due to a link at some point in history, via the Sagar family line, (Warwick's 1808-1882, mother Eleanor Sagar 1786-1853), to The Earl of Warwick, The King Maker. I have been unable to prove this, but the continued use of the name Warwick does make research complicated! Many of the Sagar first born sons are also named Warwick.

Here are two examples of my own work: 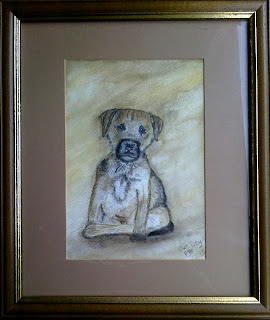 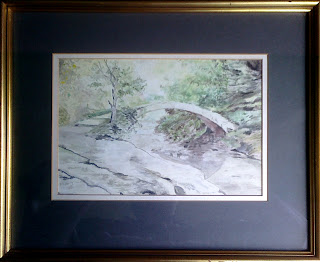 Above: An original portrait of our own puppy Toby, painted 1993.

Right: A copy in watercolour of a W.T.Brookes painting of Marple Bridge. I painted this in 1981, as I liked the original, but wasn't due to inherit it.

2013. My research continues, and with a major breakthrough during 2012, many new avenues have opened up. I managed to trace the granddaughter, (my 4th cousin), of Warwick Brookes MP (1875-1935). Her mother, Claire, (1899-1983), led a very privileged and interesting life. She has given me access to many interesting documents, photographs, last wills and testaments, ledgers and title documents from her family's past. Claire's second husband came from the aristocracy, and as such my new contact, who is their daughter, is directly descended from Algernon Percy, 1st Earl of Beverley (1749-1830), and his father, Hugh Percy, 1st Duke of Northumberland, (1714-1786) on her father's side. Claire's father Warwick, MP, and son of the famous photographer, (my great grandfather and Warwick Brookes the photographer of 350 Oxford Road, Manchester, were 1st cousins), was brother-in-law to Eugen Sandow, and also his business partner for a time, until that particular venture failed dramatically at the start of the Great War period, when he managed to 'bail out' with his reputation relatively unscathed. I also managed to buy, again from the USA, an 1880's etching of my great great grandfather's last ever drawing, finished shortly before his death in 1882. It is a commission he undertook to draw an illustration for a published Edwin Waugh poem, 'Come Whoam To Thy Childer An' Me', said to be his best ever piece, and toiled over as he suffered illness in the final weeks before his death, according to the Leatherbrow biography. The British museum have also now digitized their archives, and it transpires that they also hold many of his drawings which can be viewed on line. Family history research continues to provide many surprises.