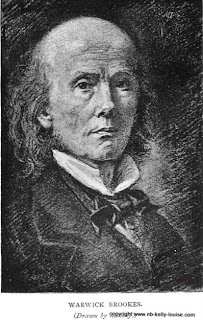 
Warwick started his working life as a tear boy, (an unskilled worker who spreads the dye ink over a skin covered table in an even layer. The block printer then impresses his block into this after each cloth impression), at the workplace of his uncle, a block printer at Messrs. John Barge and Co. It quickly became apparent that he had a flair for drawing and design, and was soon promoted to the designing room on a wage of 5 shillings a week. In 1832 he left the company to join John Dugdale Bros., Salford, and in 1840 joined Messrs. Cook and Unsworth, as a block designer, a firm which was to become The Rossendale Printing Company. He stayed here for some 26 years until he was struck with illness, consumption, which was to incapacitate him. He pursued his art in his spare time using nothing more than a "halfpenny joinery pencil". His work was exhibited at The Mechanics Institute, <Click>, during lectures he attended there, and he later gained two out of the four exhibition first prizes offered at The Royal Manchester Institution. The other two being given to Francis Chester, <Click> later of the Theatre Royal, and Robert Crozier, <Click> the (later) highly esteemed president of the Manchester Academy of Art. In 1868 Brookes was elected a member of The Manchester Academy Of Fine Arts. His drawings were used to illustrate books for authors of the time, including this, by child writer and poet, <Click> Marjorie Fleming, edited and published long after her death, aged 8, by Dr. John Brown, <Click>. (This is an on line readable book). He was also a founding member of the United Society of Manchester Artists, along with Letherbrow and others. They met over Rose's China Shop, King Street, Manchester. (John Rose & Co, Coalport Porcelain manufacturer and retailer, 67 King Street, Manchester in 1841, also at Cole Brook Dale, Shropshire). *From Pigot's Directory of 1841. The shop was at 25 King Street in the directory of 1828. 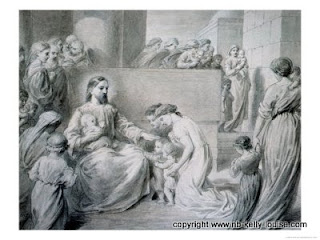 This is an example of Brookes' work, Christ blessing little children. The original is in The V&A, London, and is one of the royal purchases I mention later. 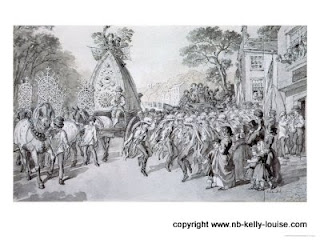 May Day at Bowden, Cheshire, is another example. The original is also held at The V&A, London.


This is a link to the full collection of Brookes' work, with images, that are held at Manchester Art Gallery: <Click> Usually, his subjects were members of his immediate family.

Manchester artist, Frederick Shields and others suggested to Brookes that he could provide his family with an income during his illness, by photographing ** and selling copies of his drawings at £4 a set, and it was at this time of incapacitation due to illness that he made the acquaintance of Sir Walter James, Baron Northbourne of Bettesshanger. <Click> who helped promote this venture. Now in the peerage, he had been an MP and friend of W.E. Gladstone. As a result of this friendship Brookes would now mix with society, and was a regular guest at their country houses, including that of Gladstone at Hawarden, Wales. Gladstone introduced Brookes' work to Queen Victoria, who subsequently bought some, as did her daughter Princess Louise <Click> , although Prince Albert had already brought it to the attention of the Queen after he saw his work at the exhibition "Art Treasures in Manchester" <Click> which they visited in 1857. The purchased drawings are now part of the collections at The V&A museum in London. As a result of this we are now aware of a letter: "The Queen has written to Mr. Gladstone, saying, "Mr. Warwick Brookes's drawings are really charming; she has purchased four."" Another letter to Brookes contained a great surprise. It was dated: Downing Street 27th March 1871..."Mr. Gladstone desires me to inform you that the Queen has been pleased to approve of the grant to you of a pension of £100 per annum. From page 459 of W.E. Gladsone's diary, which is published: "Monday 6th March 1871, dined at Lady James's and secured 3 drawings of W. Brookes". There are several other entries throughout the various volumes of the diary that relate to Warwick Brookes.

** There is no evidence that this Warwick Brookes was ever involved in photography, although some archived documents do refer to him as an artist and photographer. This is likely to be an error in research, and is more likely to be his son, also Warwick, who was a photographic artist and miniature painter. However, by studying the ages of the two photographers at the time the artist commissioned photographic copies of his own drawings, if the work was done by a family member, it would probably be his nephew Warwick who at this time was well established in this type of work, operating from his studio at 350 Oxford Road.

Brookes passed away on 11th August 1882 at his home in Egerton Grove, Stretford New Road. He is buried in Brooklands Cemetery, Sale, Cheshire. 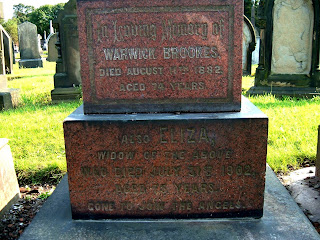 On his death his eldest son Warwick, (a photographic artist working in Manchester, read later about the other Warwick Brookes Manchester photographer), and his brother, my Grt. Grandfather, William Terry, (also a prolific landscape artist in watercolour, we have many of his paintings on our walls), wrote to inform Gladstone, who replied by return:

My Dear Sir, - My wife and I are much moved by your letter. We looked upon your father's life, I may say, with an affectionate interest and regard. It was indeed noble, pure, and beautiful; and it seemed as if an exterior discipline, without internal conflict, sufficed to raise him to the point at which he might escape from the flesh, and from the pressure of the world, to enjoy at once the vision of God.
Have the goodness to inform me as to the health, and also as to the circumstances of your mother (I believe she survives him) and family. I remain, your very faithful and obedient servant,
W.E. GLADSTONE.

This letter included a donation from the Queen's Bounty of a hundred pounds.


Here are the contents of correspondence between Dante Gabriel Rossetti <Click>, and  Frederick Shields <Click> about my Grt Grt Grandfather's illness:
CORNBROOK HOUSE,

MY DEAR ROSSETTI, For the past month that is,
ever since Mr. M'Connell gave me the opportunity of
seeing the " Sir Tristram" I nave meant to write how great
pleasure I enjoyed in hanging over it ; and if (as you inti-
mated) you relied in any measure on my poor opinion, it
will satisfy you to know I indeed think with you that it
approaches nearer to the highest standard than anything
you have yet achieved in water-colour.

Let me say how much the subject of your last note
gratified me, for I have known Warwick Brookes for some
years, but not intimately, his disposition being too retiring
for that. Your information concerning him is not very
accurate, for he must be nearer fifty than forty, and has a
family of six children, the eldest girl being about sixteen
years. With this young family he never dared to venture
to give up a situation as pattern designer for ladies dresses
which he held in a firm here, and which brought him in a
settled sum per week, for the uncertain and fluctuating
remuneration attending the profession of art. So that all
you have seen, and much more, has been done during the
leisure hours of his evenings and Saturday afternoons.
For two years back he has been lying sick of consumption ;
and his main, perhaps his only, source of income has been
the sale of the set of photos, with which you are acquainted.
Sir Walter James has most generously exerted himself to
spread the circulation, and other friends have done their
best also. He is too independent in temper to accept
help in any other way ; but I am certain would feel both
grateful and pleased with such assistance as you can
secure for him in this way. The price of the set is four
pounds. 1 took the liberty, believing it would gladden
his sick chamber, of showing him your letter on Saturday
night ; and though he was too weak to read it himself, he
most earnestly expressed his estimation of your approval.
Most truly yours, FREDERIC J. SHIELDS.

MY DEAR SHIELDS, Your letter calls for my thanks in
various ways. First, about Warwick Brookes, whom I
almost guessed to be more of a regular artist than had
been represented to me. I shall be anxious to have a set
of his admirable photo'd drawings, and will write him with
this, enclosing the 4. When here I have little doubt
their being seen must lead to further sales. Howell, to
whom I spoke on the subject and who saw the photos at
my mother's, at once said he would undertake that Ruskin
would wish to have an original drawing. I will speak
further to him when my own photographs arrive. It is
melancholy to think that any aid and appreciation, such
as the drawings cannot fail to excite, will come only at
such a painful time. Is there really no hope of recovery ?
I cannot understand how such an artist can have failed so
long to obtain employment from the dealers in Manchester.
His babies are worthy of William Hunt, and have never
been surpassed. Does he work in colour ? In such case
I fancy employment in London as a copyist to begin with
might easily be obtained. But I suppose the health ques-
tion now quite negatives this.

From The National Archive, The Life and Letters of Frederick Shields.

Shields was living at Cornbrook House, Manchester, which was close to Brookes' home address.
Rossetti lived at 16 Cheyne Walk Chelsea, a biography can be found here: <Click>

**There are updates in the labels listed in the sidebar.