Descended from Warwick's 1808 -1882, brother Thomas, is Warwick Brookes, pioneering photographer, who worked from his studio on Oxford Road, Manchester. Designer of the Academy Camera, this Warwick Brookes has a portrait in The National Portrait Gallery collections, <Click> the subject being Sir Henry Irving, <Click>, and is known to have photographed many more of the rich and famous, here is another example of his work: 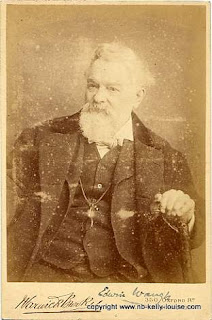 He had built an enviable reputation as a pioneering photographer,with a famous clientèle, and was obviously dismayed that his cousin, Warwick, the artist's son, had set up his own photography business in the same name, (see above). There is evidence from photographs of his in the National Archives, that he wrote statements on the back, disclaiming any association with any other Manchester photographer operating under the same name.

He had three children, Warwick, (again)! who became an MP for Mile End, London, and was also a keen ocean yacht racer, and in fact died during Cowes Week on The Isle of Wight. <Click>.

Gordon Byron, who was an actor and later became Captain in The Duke of Cornwall's Light Infantry, killed in action on The Somme 1916.

And Blanche, who worked as his assistant at 350 Oxford Road, Manchester, before she married Eugen Sandow. 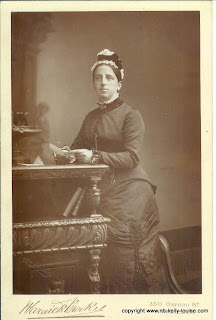 The subject of the portrait on the left is unknown, but is an example, by the notice printed on the reverse, as shown below, of how he disapproved of his cousin, also Warwick Brookes, setting up his own photography business on Victoria Street Manchester.


The original photographer had built up a nationally recognised reputation, and was a pioneer of photography, and considered his reputation would be jeopardised by this "imposter" setting up in competition.
The below image can be expanded by clicking the mouse over it. 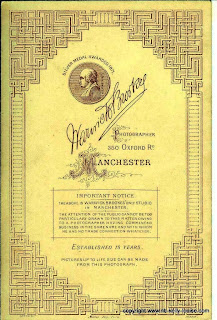 The following are records held by Greater Manchester County Record Office that contain references to both this Warwick Brookes and the other, also a photographer - his cousin.

Administrative history:
Mr. Aurthur Billcliff is one of only two surviving grandsons of Joshua Billcliff founder of one of the oldest and longest surviving camera works in the world, (1865-1955). Billcliffs made large textile and copying cameras, special stands and tripods, they were also specialists in the prototype field making cameras for Brookes, McKellen, Dancer*, Thornton, Chapman and many others.

Photograph in Daily Herald of January 2nd, 1932 showing Alfred (left) and William Henry Billcliff (right) wearing the famous brown paper caps which could only be made by Alfred Billcliff because he would not reveal the folding method (he was also the bellows maker). These caps were famous and literally hundreds of people tried to make them but failed. William Henry Billcliff the eldest son of Joshua was the designer of most of the Billcliff patents but they were always placed in the name of his father the founder. William Henry was the man who actually made the first Academy Camera designed by Warwick Brookes of Manchester (son of the famous artist and photographer) and Billcliffs continued to make the Academy in all its forms till its demise in the 1890s. The Academy was retailed by Marions of Soho. He also had a hand in the making of McKellens, Thornton's and Chapmans prototype cameras.  2155/22  1932

Photograph from Evening Chronicle of showing William Henry Billcliff (minus spectacles) holding what appears to be a Warwick Brookes Academy Camera.  2155/26  1939

****The above archived information is actually incorrect, as Warwick Brookes 1843-1929, the designer of the Academy Camera, was in fact the nephew of Warwick Brookes the artist, and not his son as stated, although his cousin, (also Warwick 1854-1922), and son of the artist, operated as a photographic artist in Manchester at the same time. This mistake is often made by researchers due to the continueous use of the name "Warwick" within the family.

The following is courtesy of http://openlearn.open.ac.uk License details :
Photographers encouraged mothers to bring their children to be photographed each year around the date of their birthday as this was seen as the best way of keeping a record of their progress and development. The following four images are photographs of Max Witte whose mother took him on regular visits to the superior studio of the photographer Warwick Brookes. Max's father was a German émigré and highly successful shipping merchant. The family lived in Bowdon in .
Some photographers actually issued birthday albums to encourage annual visits. The album itself is sometimes featured as an accessory in later portraits.

From The National Archives, Ref.1823 Photographs relating to Mrs. Witte and Family. Note the disclaimer which is printed on the reverse of one of the photographs 1823/1:-
Administrative history:

The donor was born in 1904. Her parents both came from Germany. Her mother, Helene Opitz, came from Stuttgart and her father, Julius Witte, from Iserlohn. Her mother came to England to live with an uncle who was married to an English woman. She met Julius Witte in Manchester and they married in 1887. Helen was then 21 and Julius 32. They lived in Heaton House on Palatine Road until 1901 and then moved to Dunham Rise in Altrincham. Max, the donor's brother, was born in 1888, sixteen years the donor's senior. He attended Manchester Grammar School.
The donor's father was part of a firm called 'Beatty and Altgelt', a shipping merchants. The firm was started in 1864. The donor's father's brother-in-law was called Altgelt. The firm mostly dealt with South America. The donor's father became a partner. He died however in 1907 and the donor's mother had to take his place. She had never worked previously but had no choice. In 1914 however she was considered an enemy alien. Although living in England she had never became naturalised and still had a German passport. The name of the firm was changed to "Witte and Dyckhoff". Max Witte could continue in business as he was born in England. Helene Witte's capital was confiscated.

The donor's parents. Probably taken at the time of their marriage. On reverse of photograph: Warwick Brookes, Photographer. 350 Oxford Road, Manchester. Important Notice. The above is Warwick Brookes only studio in Manchester. The attention of the public can not be too particularly drawn to this matter owing to a photographer having commenced business in the same name and with whom he has no trade connection whatever. Established 1865. Pictures up to life size can be made from this photograph.  1823/1  1865

Brookes probably had the best theatrical connections at the time. He is known to have photographed W.C. Fields while he was touring the British music halls around 1904/05. This is signed in ink by Fields "To Mr and Mrs Jenkins, Best Wishes, W.C. Fields". Fields, a Vaudeville veteran appeared in every version of Ziegfeld's Follies between 1915 and 1921. Interestingly, Flo Ziegfeld Jnr. was best man at Brookes' daughter Blanche's wedding to Eugen Sandow in 1894, and Ziegfeld was Sandow's manager. Of course, Sandow also featured in the Ziegfeld Follies. British actor Milton Rosmer also sat for Brookes in 1911.