The brother of my great grandfather.

This is Warwick Brookes's 1808-1882 eldest son. He is listed as a photographic artist, and had a studio, operating in his name, in Manchester City centre. We have evidence, from statements printed on the back of significant photographic work done by his cousin, also Warwick 1843-1929, that there may have been some friction between the two of them over this. Warwick, 1843-1929, was an established photographic pioneer, operating from his studio on Oxford Road, Manchester. He photographed many famous people of the time, and has a portrait in The National Portrait Gallery, the subject being Sir Henry Irving, and wished to disassociate himself from his cousin's work.

The following are records which include references to Warwick Brookes and his cousin, and are held by Greater Manchester County Record Office

Administrative history:(From the record held by www.nationalarchives.gov.uk ), which are the two photographs detailed below, each coming from the studios of two different Warwick Brookes, both operating as photographers.

Donor's father Thomas Kirkpatrick was brought up by his grandparents Kirkpatrick who kept a commercial hotel in , off (where Boddingtons Brewery office now stands). Donor's great-grandfather was born in and married twice. He came to live in and from there came to . There were three children: Thomas Suthers (donor's grandfather), Minnie (died 1965 aged 89) and May, the youngest.
Thomas Suthers Kirkpatrick went to . He is said to have attended the same as Dame Laura Knight. He held a post as head art master at and later opened a photographic studio in . He married in 1900. His son Thomas (donor's father) was born in in 1904. His mother died when Thomas was 4 weeks old.
Thomas Suthers Kirkpatrick had an assistant in the studio, Mattie Alcock who features on the photographs and helped to bring up young Tom. Thomas Suthers is known to have worked as a photographer for The Manchester Guardian. Donor remembers seeing postcards sent to her father from his father when he was covering the ceremony whereby the Duke of Windsor was made Prince of Wales in 1911 and the launch of the first British Airship at Barrow in 1912. Thomas Suthers emigrated to at the end of World War I. His mother died during the War and his father at the end of it, so it is possible that the family home was being broken up at the time he left. At this time Thomas Suthers was living on , . It is said that he took his housekeeper with him. According to Mattie Alcock the Manchester Guardian was in touch with Thomas Suthers Kirkpatrick upto the 1930s and he apparently moved from to .
Thomas Kirkpatrick was apprenticed as an engineer working at Metrovicks at the time his father emigrated. He was left in lodging with the woman who had come to to act as housekeeper when his grandmother died. He later married the housekeepers daughter, Jane Ellen Whittaker in 1926. His family felt he was marrying beneath his station.
They had one daughter, the donor, born in 1928.
The following information is taken from the Manchester Trade Directories.
Kirkpatrick Thomas Suthers 341 Waterloo Road, c.1899-1906
(trade and commercial) 3 Tib Lane 1907-1912
Alcock, Mattie 3 Tib Lane 1913-17

Minnie Kirkpatrick, sister of Thomas Suthers Kirkpatrick. Minnie became a teacher and taught in . Following a mastoid operation she became deaf and had to give up teaching. After the family home was broken up, she moved to . She did not work but was able to live off an income. She did not marry. She died in 1965. Impressed in bottom right corner: Warwick Brookes. Printed in gold on mount: Warwick Brookes. .  2360/2  1965


[There have been many errors through history where, due to the use of the name Warwick, mistakes have been made when attributing work to a specific person. Care has to be taken when researching the four Warwicks, and understand that sometimes historic data may be incorrect. Except for work he produced as a student in the days of the society meetings above Rose's China shop, there is little evidence that Warwick Brookes 1808-1882 produced any notable volume of work in any medium other than pencil, although he did produce some of his work as etchings. ( <Click> for a description of the etching process). It was said that he didn't have an eye for colour, although his drawings in monochrome were without fault. William Terry, his younger son, worked in watercolour, and occasionally in oil. Warwick 1854-1922, his eldest son, listed himself as a miniature painter and photographic artist. The following painting is currently on sale as a reproduction, available on the internet, and is attributed to Warwick Brookes 1808-1882 on the seller's website. However, if it is signed as work by Warwick Brookes, then it is possibly more likely to have been done by his eldest son above. 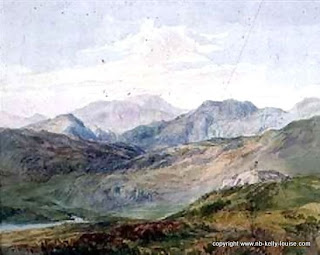 A landscape, in oil, titled Llanrhychwyn, near Trefriw reproductions are on sale attributed to Warwick Brookes 1808-1882?

According to the 1882 Manchester City News article, Warwick 1808-1882 entered one picture in oil (three cats), amongst over a dozen pencil drawings, at an exhibition in Peel Park, Salford, the subordinate of the 1857 Art Treasusures of Manchester exhibition. These were then to come to the attention of Prince Albert, who visited the exhibition. Brookes became famous for pencil drawings of  the human form, particularly children, and usually signed his work with a monogram WB rather than the full name.﻿ He also exhibited work, along with other members of the Manchester Academy of Fine Art, at the Royal Institute in 1870. In addition to his usual submission of numerous pencil drawings, this year he also exhibited a watercolour of countryside and flowers in Surrey.]

Warwick Brookes 1854-1922, the subject of this page, spent the last part of his life living in the Glossop area, and from stamped impressions on photographs he took of injured soldiers together with nursing staff working in a local military rehabilitation centre during the Great War, would appear he had a photographer's studio in Marple Bridge by then. 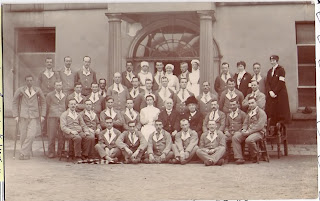 The above is a photograph, taken at the entrance of Brabyns Hall, Marple, <Click>, which was used as an auxiliary military hospital during the 1914-1918 war. It is courtesy of Andy Wade, who published it on the Great War Forum, <Click>, in an attempt to identify it and its location. Andy states that the picture is embossed "Warwick Brookes Marple Bridge."

This Warwick Brookes died, and is buried in Glossop.